Revelation 9:6 (MEV): In those days men will seek death but will not find it. They will desire to die, but death will elude them.

Revelation 13:16-17 (MEV): He causes all, both small and great, both rich and poor, both free and slave, to receive a mark on their right hand or on their forehead, so that no one may buy or sell, except he who has the mark or the name of the beast or the number of his name.

Revelation 14:11 (MEV): The smoke of their torment will ascend forever and ever. They have no rest day or night, who worship the beast and his image and whoever receives the mark of his name.

These texts allude to some interesting thoughts if one pays attention to avant-garde research in science.

Since the beginning, the shining one (the serpent, what many scoffers call the talking snake) has seduced humanity with a lie, ‘You shall be as gods.’ What is called the science of evolution furthers the lie, that life evolves upward, and that men are evolving to be better. The occultists and pagans would agree with the sentiments found there. Many of the world’s religions would also agree.

The coming mark the writer of Revelation warns of, may be many things. It will probably be an outward mark of allegiance to a man. It also will be necessary to participate in the economy that comes. These things we know from the text, but these ideas could be cursory to what it may also be. When the apostle John speaks of the ‘mark,’ he addresses the dire spiritual implications that befall those who choose to take it. Reading Revelation clearly, one can also see those who take the mark of the beast are no longer able to be saved. Can we infer that this mark alters humans in such a way that they are no longer human?

I think so. Salvation is graciously offered to humans. It is provided by the finished work of a Human Being that lived around 2,000 years ago. His name is Jesus. He lived as a man. He also died as a man, but not a death that was the result of His own sin. He died for the penalty of the sin of all (1 John 2:1-2.) He also rose again, defeating death and nullified its sting (separation from God.) Salvation is only made available by humans, as another human graciously gave of His own blood for that purpose.

Back to the mark.

The first citation above indicates that death will elude those who take the mark. I have glossed over that many times. Given recent advancements in science that include genetic programming and manipulation, it may help us to examine what that may entail.

It is possible (and a somewhat common practice) to snip a portion of DNA from one organism and insert it into another. It is not necessary that the organisms be related in the way we think of that idea. This practice is called genetic modification. (The resulting organisms fit the definition of chimeras.) Gene therapy is a burgeoning new world of genetic modification that founds new therapies in the field of medicine. The dream of many in the fields of such bio-technologies is extending the length and quality of human life. Genetic engineering is exploring novel ways at achieving this.

There is also another branch of science that would work inside the body, modifying it in real-time. This field of exploration is nanotechnology. This involves placing tiny machines inside our bodies to perform specific functions. It can also include a way of modifying existing cells to operate like customized machines that can be manipulated to perform specialized tasks, think it like programming tiny computers for a certain task. The goal is to use these machines inside of our bodies to augment us.

It is conceivable that this coming mark could offer some of these technologies. Perhaps it will be introduced not just as a way to buy and sell or show allegiance… But may include some way to combat the effects of aging and disease. In a way, it would be effectual at delaying or even preventing death. In essence, it would alter humans to become like gods. It sounds to good to be true. The faint stench of sulfur seems to surround the idea. It is the ultimate deception culminating from that first one… The lie from the serpent ‘you shall be as gods.’ Like his intent then, the inference would be made that God is keeping something from us… Immortality.

Look further at the linked image below. You see the alleged seven Kundalini Chakras overlaid on the Caduceus. The intertwined serpents around that center rod is a modern symbol used to signify a field of medical science. The winged image on top of it is the winged-sun disk. (These symbols can be researched further if you like.)  I want to draw attention to those intertwined serpents, note the double-helix design. It brings to mind the modern depictions of the construction of the DNA strand. 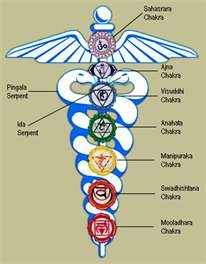 The long pursuit of humans who are beguiled by the lie… Is to be like gods. The scientific mantra is that humans are evolving to being better suited for their environs. There are some even wanting to further this evolution along in a self-directed fashion. It used to be called eugenics, but for the sinister implications of that word, it is no longer used… Though the ideas behind it are alive and well.

As the deception is ever increasing, the serpent subtly alters what God says and does in his mimicry of the Most High. That is, he copies what God has already done after his own sinister ways. This is about the shining one wanting to make humans after his image, and creation after his will. The coming deception seems to be based on the very first one, you shall be as gods. Maybe this mark will offer an alteration in humans, or better said, an augmentation that makes the ones having it substantially more impervious to death.

Could it be, that those who take that mark which may include technologies designed to augment humanity become altered in their DNA… That is, ultimately making them  different than human?

The Bible clearly states those who take the mark shall not be saved. In other words, they are not eligible for the blood propitiation offered freely to all by Jesus.

Some others offer even more speculation… That a ‘third strand’ of DNA can be added in the middle of the double helix. Look again at the Staff of Caduceus. Look at what is hidden in plain sight. Also consider the Kundalini pursuit of enlightenment that is superimposed upon it. Everything is spiraling upward toward god. In this case, god would be the sun god signified by the winged sun disk.

It’s something to think about. Either way… Don’t fall for the age old lie.

This site uses Akismet to reduce spam. Learn how your comment data is processed.