Now in the sixth month, the angel Gabriel was sent from God to a town of Galilee named Nazareth, to a virgin legally promised in marriage to a man named Joseph of the house of David. And the name of the virgin was Mary. And he came to her and said, “Greetings, favored one! The Lord is with you.” But she was greatly perplexed at the statement, and was pondering what sort of greeting this might be. And the angel said to her,
“Do not be afraid, Mary, for you have found favor with God. And behold, you will conceive in the womb and will give birth to a son, and you will call his name Jesus. This one will be great, and he will be called the Son of the Most High, and the Lord God will give him the throne of his father David. And he will reign over the house of Jacob forever, and of his kingdom there will be no end.
And Mary said to the angel, “How will this be, since I have not had sexual relations with a man?” And the angel answered and said to her,
“The Holy Spirit will come upon you, and the power of the Most High will overshadow you. Therefore also the one to be born will be called holy, the Son of God.
And behold, your relative Elizabeth—she also has conceived a son in her old age, and this is the sixth month for her who was called barren. For nothing will be impossible with God.”
So Mary said, “Behold, the Lord’s female slave! May it happen to me according to your word.” And the angel departed from her.

It is what Mary said. It wasn’t that she didn’t have a choice in the matter. She could have refused. Yet she didn’t. She called herself the Lord’s slave.

Did God make her do it?

We tend to think about things that happen linearly because that is our only experience in this time-matter-space existence. All of this could have been orchestrated to happen to bring forth the Savior at the right time. It is well within the power of God. Such a concept as that brings to mind a child posing his toys in play, to do as such imagined. God doesn’t do that.

I think people live their lives and make choices just as Mary made. Those choices could be to honor God or more likely not. God didn’t cause Mary’s choice. Nor did He predict it. (I am sure that will cause some to gasp. Relax.) He gave us patterns for which to expect. We refer to this as prophecy.

Prophecy is just ‘truth-telling.’ In this particular situation, Isaiah recorded a truth for Ahaz, which had a dual pattern, like much of these prophecies. That dual pattern found its ultimate completion in the birth of Jesus. He is God in human form. Not appearing as God, but adding humanity to God.

God can tell us the beginning from the end. He is the only One able to do such things. He can do that because of His omniscience and omnipresence. Every moment is a present reality for God. He is present in the moment Isaiah penned ‘a maiden shall conceive.’ Just as He is present in the moment that Mary met the angel, and when Mary conceived. He is even present at that moment with Eve when He told her that her ‘seed’ would bring the redemption of humanity.

I am certain through the noisy bustle of this season, you’re going to hear the skeptical claims of holy rape and mistranslation.

Mary fully participated, yielding herself to what would happen to her. What we do know, is the conception of the Babe wasn’t sexual, and it wasn’t rape. Otherwise, she couldn’t be a virgin when she gave birth.

And that brings us to the second point. The contention over the term virgin. Many will say the Hebrew word almah cannot be translated to virgin, as it only means maiden. Yet, virgin is an acceptable translation from Hebrew just by looking at how it is used elsewhere in the Bible. Regardless, it never refers to a married woman.

Notwithstanding the subtle controversies surrounding the Septuagint. This is a Greek translation thought to have been in common use around the time of Jesus’ birth. Here is an English translation of the Septuagint for the quotation from Matthew’s Gospel above.

Because of this, the Lord himself will give you a sign: Look, the maiden will become pregnant and will bear a son, and you will call his name Immanuel.

Here we see the term maiden as it is translated from Hebrew to Greek and then into English. This seems to offer the skeptic some refuge, but does it really?

With a bit of assistance from interlinear tools… We discover something important. 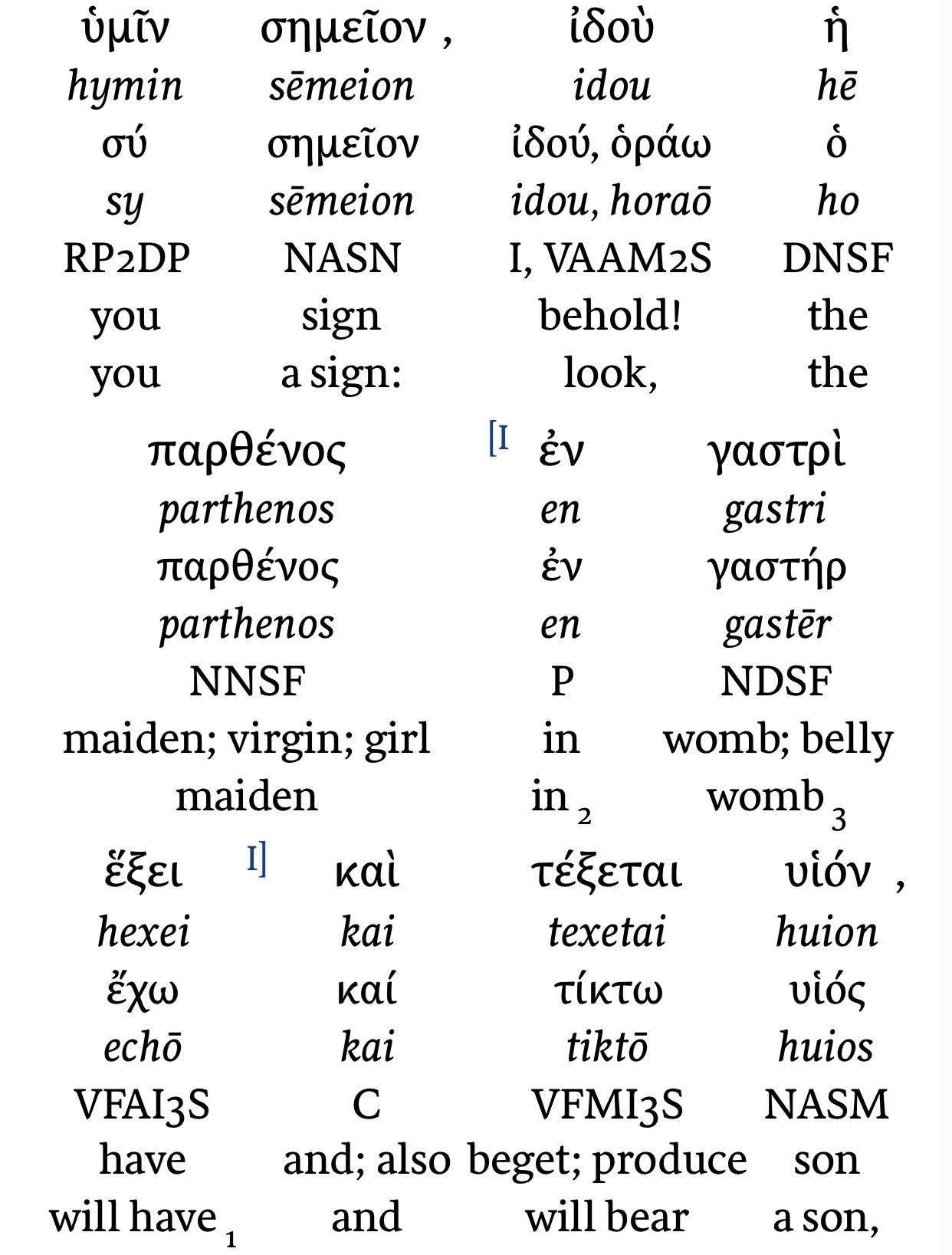 Do you see it?

Parthenos does mean maiden and virgin. This tells us the skeptics are wrong. This could be accepted scholarship for those. I offer it because skeptics seldom take the time to really understand their objections.

Yet somewhere in the back of my mind, I simply prefer to believe what God has said. He moved in such a way as to have Isaiah write of that, using a Hebrew word that includes the meaning of virgin. After that miracle of the birth of the God-Man, He then moved Matthew in a similar fashion to Isaiah. In his Gospel, he used the word parthenos in translating Isaiah 7:14 (Matthew 1:23.)

That is how we know Jesus was born of a virgin. God is not constrained to (or by) time, matter and space. And His Word is true and reliable.

This site uses Akismet to reduce spam. Learn how your comment data is processed.